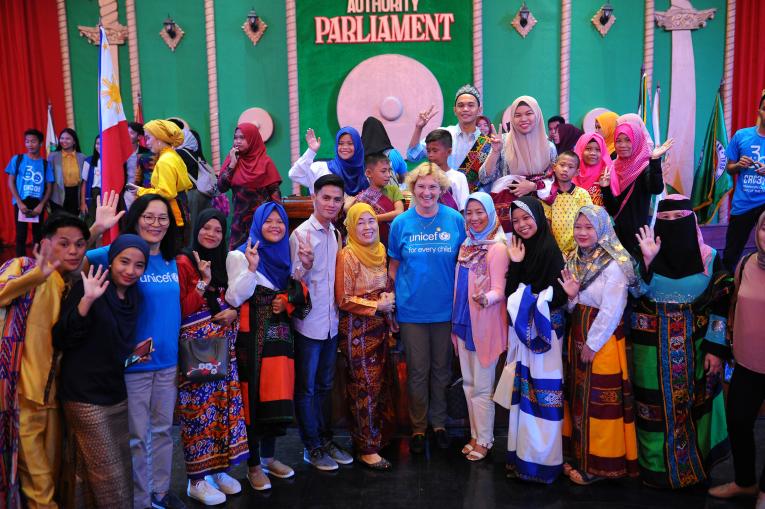 Karin Hulshof, UNICEF Regional Director for East Asia and the Pacific, and Oyunsaikhan Dendevnorov, UNICEF Philippines Representative in blue UNICEF shirts with children after a special Bangsamoro Transition Authority Parliament session to commemorate the 30th anniversary of the Convention on the Rights of the Child and World Children's Day on 20 November 2019. UNICEF Philippines

COTABATO CITY, Philippines – The Bangsamoro Autonomous Region in Muslim Mindanao (BARMM) Government commits greater focus on children’s issues in a landmark Special Parliamentary Session to commemorate the 30th anniversary of the Convention on the Rights of the Child (CRC), the most widely ratified human rights treaty in the world.

The Bangsamoro Government responded to the BARMM Children’s Declaration advocating for better education, an end to poverty and hunger, lasting peace, more parenting programs and increased participation in finding solutions to issues that affect them.

Bangsamoro children are among the poorest in the country and are left behind under all major indicators of development:

“Almost 30 years after the Philippines ratified the Convention on the Rights of the Child, far too many children are still left behind particularly in BARMM,” said Karin Hulshof, UNICEF Regional Director for East Asia and Pacific. “CRC, in its 30th year, is about building on the gains address the unfinished business. It is about to reinvigorating the efforts to end disparities and deprivations children continue to suffer,” she added.

BARMM Government Chief Minister Murad Ebrahim delivered a statement of commitment to protect and promote the rights of children and address these pressing issues. In addition, he co-authored, together with majority of the members of the Bangsamoro Parliament Resolution No. 147, a resolution “giving full support to Bangsamoro Children’s Declaration in commemoration of the 30th anniversary of the Convention on the Rights of the Child.”

The resolution reiterates provisions from the Bangsamoro Organic Law, “Bangsamoro policies and programs shall take into utmost consideration the best interest of children and promote the rights of children. Youth, and adolescents, including their survival and development. The Bangsamoro Government and its constituent local government units shall provide for adequate funding and effective mechanisms for the implementation of this policy.”

Business leaders, religious leaders, diplomatic missions, the media, non-government organizations, civil society organizations, as well as all the five governors of the BARMM provinces also made their pledges in support of the Children’s Declaration.

“Today’s special Parliamentary session is a firm step to change what is business as usual,” said Ms. Hulshof. “We see children and youth are given the rightful space to have their say on what they envision.

“Congratulations to our young friends for voicing their views so wisely. We commend the BARMM Government for owning the accountability and for giving children hope and the opportunities that are rightly theirs. I also thank the professional groups and stakeholders for joining the Call with their pledges of support,” she said.

Before joining the Special Parliamentary Session on children, children from all over the Bangsamoro celebrated World’s Children’s Day in a festive and colorful #GoBlue celebration.

UNICEF is partnering with Council for the Welfare of Children (CWC) and Department of Health to support the Natioanal Children’s Month celebrated in the Philippines in November. The 27th National Children’s Month in November 2019 will highlight the Philippines’ implementation of the CRC and its accomplishments in celebrating the CRC@30. The NCM 2019 is led by the Council for the Welfare of Children (CWC), Department of Social Welfare and Development and the National Youth Commission. The activities are focused on four cluster of child rights: survival, development, participation and protection, in each week of November. UNICEF is particularly supporting CWC in the youth camps addressing issues around adolescents and mental health.