Seventy-seven years after the founding of the United Nations, UN Day is as relevant as it was when it was first observed

October 24 is United Nations (UN) Day. It marks the anniversary of the entry into force in 1945 of the UN Charter. With the ratification of this founding document by the majority of its signatories, including the five permanent members of the Security Council, the UN officially came into being.

Seventy-seven years later, UN Day is as relevant as it was when it was first observed. The founding of the UN was a celebration of the end of the Second World War. However, global turmoil remains in various forms. Today, we are living in very complex times, where crises overlap, interconnect and exacerbate preexisting vulnerabilities. We have reached unusual levels of unpredictability, challenging multiculturalism and the various levels of political leadership.

The famous Filipino diplomat, Carlos P. Romulo, who was among the founders of the UN, and even served as the President of the General Assembly, once said, “There should be no inferiors and no superiors for true world friendship”. A strong supporter of equality and independence, he in many ways reflects the aims that the UN still strives towards today, including through the commitment to “leave no one behind” in reaching the Sustainable Development Goals (SDGs).

The Philippines is one of the original 51 charter members that created the UN in 1945. For 77 years, the Philippines has demonstrated its commitment to the values inscribed in the UN Charter, including by upholding its UN treaty obligations, working toward development, and taking steps towards addressing humanitarian situations.

The Philippines has ratified eight of the nine core international human rights treaties – the only country in Asia to have done so. In October 2018, the Philippines was elected to its second consecutive term on the UN Human Rights Council (UNHRC)-- the fifth time the Philippines has been elected a member since the UNHRC’s establishment.

The Philippines actively took part in the negotiations for the Sendai Framework for Natural Disaster Risk Reduction in 2015, and succeeded in having migrants included in the Framework, particularly to recognize their contributions in building disaster resilient communities.

The Philippines was one of the very first countries to report back on its implementation of the 2030 Agenda and the Sustainable Development Goals (SDGs) in July 2016. In July 2018, and then in July this year, the Philippines presented its Voluntary National Review at the High-Level Political Forum.

The Philippines has also been a staunch advocate of the protection of the rights and promotion of the welfare of migrants, through the implementation of the Global Compact for Safe, Orderly, and Regular Migration (GCM) since its adoption by the UN General Assembly in December of 2018. The Philippines added a new chapter on international migration and development--based on the GCM-- in the Philippine Development Plan (PDP) 2017-2022 and this chapter will buttress and reinforce the National Implementation Plan of the GCM.

The COVID-19 pandemic put to the test this seven-decades-old partnership. Faced with this global challenge, and through working together, the partnership became even stronger, focusing on response and recovery for affected Filipinos. It became a time of solidarity, alliances and joint work.

In record time, the UN Country Team in partnership with a wide range of national stakeholders came up with an innovative  “Socioeconomic and Peacebuilding Framework for COVID-19 Recovery 2020-2023" (SEPF) to support national priorities.

In the first year of implementation of the SEPF, the Philippines and the UN conducted more than 150 different initiatives to complement national and regional efforts “to leave no one behind”.

More than 24 million doses of COVID19 vaccines were delivered by the COVAX facility, with the invaluable support of development partners.

Some 1.3 million people in hard-to-reach areas were provided with non-COVID health services.

More than 5 million at risk individuals were able to access essential health services.

More than 6 million boys and girls were supported with distance learning in one of the strictest lockdowns worldwide.

Working with local authorities, the UN Country Team supported more than 365,000 people in remote areas, ensuring their access to clean water and sanitation.

In 2021 important achievements in peacebuilding were won in the Bangsamoro Region.The UN supported the Government to sustain peace dividends through joint programmes that strengthen governance, foster social cohesion and expand equitable access to livelihood and basic services, with a focus on areas with conflict or with high- reported cases of COVID-19.

In close partnership with the Government, the UN also supported efforts to promote the first-ever UN Joint Programme on Human Rights, which was signed in July 2021  Through this joint programme, the Government, together with civil society organizations, the Commission on Human Rights (CHR), development partners and the UN are engaging in an innovative initiative  for the promotion and protection of human rights in the country.

The UN and a wide range of country-based humanitarian partners work hand in hand to join government's capacity for large-scale responses to natural disasters, such as for Typhoon Rai in December 2021 where over 200 organizations worked together to complement the government response.  By working in close coordination, the UN agencies and partners were able to reach with assistance over 1 million of the most vulnerable people in Southern Leyte, CARAGA and Region VII. The collaboration does not stop with the response. In-country humanitarian community also works with the authorities and civil society on preparedness, resilience building and innovation, such as the new UN global pilot Anticipatory Action that aims to respond to the needs of people before a disaster strikes.

At the same time, while we continue joining efforts and capacities with the Philippines in the three pillars of the UN: peace, human rights and development, we continue investing in the SDGs, whose achievement has been seriously impacted by the COVID-19 pandemic. our most recent initiative, the Integrated National Financing Framework, funded by the Joint SDG Fund, represents our cutting-edge investment to support the country in SDGs budget-planning towards the achievement of the 2030 agenda to leave no one behind.

President Ferdinand Marcos Jr. said at the 77th UN General Assembly: “The Philippines strongly supports reforms to ensure that the UN Development System delivers as one through its UN Country Team.”

We welcome the engagement of the government to support the UN reform to ensure that we are better able to adapt to the challenging times and to effectively respond to national priorities. The ongoing preparation of the new Cooperation Framework between the Philippines, which is taking place at the same time that the new Philippine Development Plan (PDP) is being developed, represents a unique opportunity to align the work of the UN with the Philippines’ development imperatives in the spirit of true partnership.

Tempered by the global  “3Cs” challenges– COVID-19, Conflict and Climate–this 77-year-old relationship is expected to become more robust as the Philippines and the UN stay the course until 2030–the achievement of the Sustainable Development Goals– and for the fulfillment of Ambisyon Natin 2040. We also acknowledge the solidarity of our development partners, who support this collective long-term vision and aspirations of the Filipino people for themselves and for the country.

The partnership between the Philippines and the UN is at the heart of our celebration of UN Day this year. It is the reason for the UN’s presence in the Philippines and the rallying point for the work of over 2000 UN personnel in the country - most of them Filipinos. The Philippines continues to make its mark in the UN, with at least 657 Filipinos serving in various capacities for the UN overseas. For these women and men, there is no more compelling imperative to keep striving. [Ends] 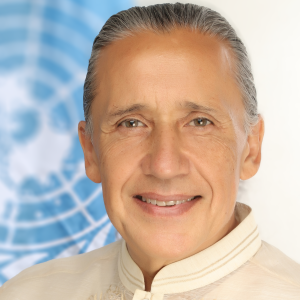