The tall male foreigner handing out chocolates and Coke was a curious sight for the young boys in a poor neighborhood in a Philippines province approximately 84 kilometers from the capital Manila.

What appeared as an innocent gesture with the foreigner inviting the boys to his home just across their public school quickly turned sinister.

Baltazar*, then 13, recalls that it was after New Year’s Day in 2010 when he first met John, the foreigner. He was picking up scraps of firecrackers on the road when John waved to him from a back gate. He gave Baltazar a can of Coke and imported chocolates – tempting for a boy form a struggling family of six siblings living with their single mother.

Baltazar’s younger brother, Joey*, was also struck by John’s kindness. Then 12 years old, he first saw John giving food and money to a mute boy. He also saw other boys waving to the foreigner, whose veranda overlooked their school. 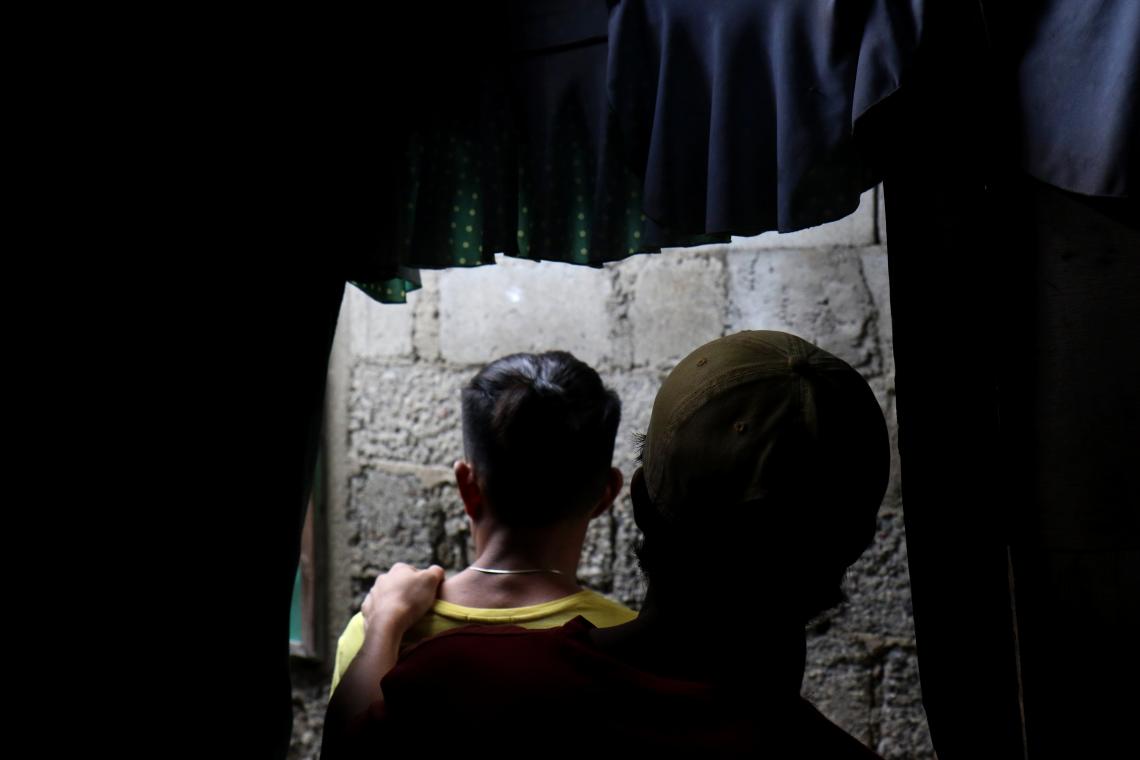 Siblings Baltazar, 22, and Joey, 21 (not their real names), at their house. UNICEF Philippines/2019/Claro Cortes IV

Lured by food, money and kindness

The boys said John would sometimes throw crumpled paper with money or chocolates as well as instructions on when they should come into his house. Inside, they watched TV, ate food cooked by the former chef and received chocolates and money.

Joey, now 20, recalls that at first, the foreigner would stroke his shoulders like his father did. During the first few days, he would go to John’s house with four other boys. Later, only two boys at a time would be invited.

“When I first went in, he did nothing wrong. The next day, he already got our trust,” Baltazar said.

“You would be scared but you get swayed by his kindness.”

Soon the foreigner started stroking his legs and touching his genitals. He got scared as the touching progressed, and when John started to perform sexual acts on him and the other boys, Joey just froze in shock.

Link to video on it's hosted site.

Baltazar, the eldest among six siblings, described the sexual acts John performed on them with an embarrassed chuckle. Both brothers admitted, while John was kind to them, they also feared him because he kept a gun in his bedroom.

The brothers recalled the times they each received PHP150 (US$3) and food from John, as well as gifts like a basketball or a cellphone, which made them want to go back again and again. A sad reality that shows how little it takes for children in deprived situations to fall prey to sexual predators.

The brothers said they spent the money playing video games and shared some of it with their mother, who was unaware her sons were being victimized.

“We did not report him because we were getting something from him,” Joey admitted.

He said they were young and wanted to continue receiving money and chocolates.

Their technician father left the family years ago. Their mother supported the family by running manicure and massage services.

Their home has always been a cramped shanty along a narrow alley, without water or electricity – a far cry from John’s big house with a large television and air conditioner.

Joey said their father was strict but since he left, they were neglected, and they would go where they pleased.

Exploited by a foreigner, bullied by their own community

The abuse continued for about a year and a half, with the boys and their friends following a routine of baths with John while he performed sexual acts on them. The young boys didn’t know that John was filming them. It was later discovered that John shared images of his victims with other pedophiles.

The videos were discovered by a technician when John brought his computer in for service. Trinidad Maneja, a social worker with ECPAT Philippines, confirmed that this happened when authorities were pursuing cases involving other boys who were also victims of John in nearby provinces.

In 2013, police raided John’s house. He was arrested. There were highly sexualized photos and videos of children found in his computers. There were also boys inside his house during the arrest. Despite these pieces of evidence, the case was dismissed, allegedly after paying bribes to authorities and victims. John was acquitted.

In 2015, John was extradited back to his home country where he was convicted on eight charges of child sexual abuse.

As they spoke about the days following John’s arrest, they remembered how scared they felt hearing tricycle drivers mocking that they were seen in a video with the foreigner. There were reports then that John was being charged and even the boys would be arrested. They said their worst fear was going jail and being taken away from their mother.

“Sometimes we would just cover our faces. Sometimes we would not want to get out of our house,” Baltazar shared. “We agreed not to tell the truth to the social workers. We were afraid to be identified, ridiculed and jailed,” he added.

“We were afraid people would find out we were the boys involved, and then our naked photos will be posted on social media and our names would be known,” Joey added.

“I was terrified of my name coming out, of being bullied and being called gay.”

The siblings shared that they were bullied in school.  A parody was composed about what they were facing and mockingly sung by their schoolmates, neighbors and even the tricycle drivers.

When asked about the other boys in the group, the brothers recalled one of them who was always in the foreigner’s house got involved in the gang rape of a girl. Another just disappeared from their community, likely afraid to be identified. The others got their teen girlfriends pregnant. 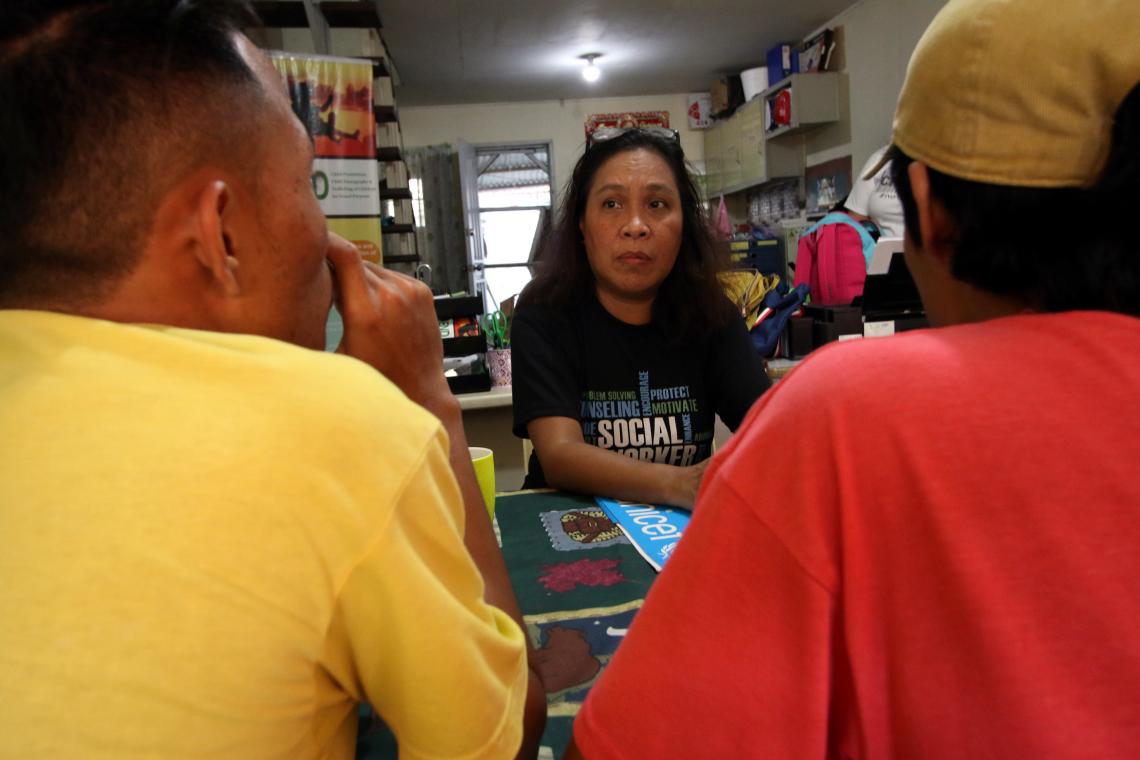 Maneja and her team found out that the perpetrator preyed on a total of 31 young boys aged 6 to 17 years old in the same village alone. She said reaching out to these boys and their parents was very difficult at first. The boys were afraid to be taken away from their families or have their identities revealed. The parents feared they, too, will be held legally responsible.

“In our experience, abused children don’t want to be put in a shelter. Forcing them would just add to their trauma,” said Maneja.

She believes what’s needed is a community-based recovery program where parents, teachers and the whole community can help children overcome their difficult experience and where services are accessible.

With the help of counselling and other psychosocial interventions from ECPAT social workers and UNICEF, Baltazar and Joey said they have moved on from their painful childhood experience.

The brothers dream of becoming architects and helping their mother and siblings. Right now, they are advocates for children against sexual exploitation, giving awareness talks to children and young victims.
Baltazar, Joey, and their friends are among the many child victims of sexual abuse and exploitation in the Philippines.

The National Baseline Study on Violence Against Children released by the Philippines in 2018 show that 22.4 per cent of young people aged 13-24 years, experience sexual violence.

A UNICEF study in 2017 showed the Philippines is one of the top sources of the billion-dollar child pornography industry and a hub for the livestream sexual abuse trade. Furthermore, around eight out of 10 Filipino children are at risk of online sexual abuse or bullying.

Baltazar and Joey are urging children who have experienced sexual exploitation to speak up, to assert their rights and to fight against predators.

“We were the victims. We should not be afraid,” Joey said. “It was not our fault.”

*Names of the children were changed to protect their identities.

This is the fourth in a series of CRC@30 Philippines stories gathered by Shirin Bhandari, Teresa Cerojano, Claro Cortes, Jeoffrey Maitem, Charena Escala, Arby Laraño and Iris Lapid, with fact checks, technical and editorial inputs by a UNICEF Philippines team.